On the Journal of Modern Craft website, I came upon a painful article called Fire It Up, a description of an exhibit this summer in Zurich. Full name: Fire It Up: Ceramic as Material in Contemporary Sculpture, written by Olga Stefan.

I keep wondering about potting in the industrial world, and I keep claiming to be a potter, not an artist. This article looks at " the status of craft in the word of fine art..."  --  a bit off to the side for me, but very close to the heart for many potters. Here's some of the painful stuff:

"The automation of industry demoted craft's importance, which until then had been essential cultural as well as economic production. This demotion paved the way for fine art to take a superior position...Skill was just no longer needed since machines did things so much better and faster. So art of the modern period needed to be other than skillful  --  it needed to be cerebral. "

Well, maybe. Certainly we aren't making anything of much economic necessity. But there is now a definite backlash against "soulless" mass production (check craftivism), as well as a move to individualizing products.

Certainly fine art is seen as superior, probably has been for far longer than the industrialized world. One of my favorite galleries in London is called Contemporary Applied Arts. People working there explained the name very casually; it's a gallery for art made in materials not accepted in most art museums. Art museums are the source of the definition of art?

OK, conceptual art is a major contemporary perspective, and does devalue skill, making. But it's not the only way to approach art.

Still, "sculptors using materials traditionally associated with the crafts, specifically clay...are called potters or ceramicists, not sculptors...Even Peter Voulkos, the art world's token ceramic sculptor, is often referred to by art critics and historians as a potter. Why this special categorization which smells of contempt?" Ouch, ouch, ouch.

Her answers, to summarize, are

1. the long history establishing clay work as functional, therefore craft. Even Rose Slivka as quoted in this article, (and she was a major supporter of craft as art) defined the difference as function and control:  any reference even to function in a piece makes it craft. And a craftsperson tries to have complete control over the making and the aesthetic quality of the result. An artist values chance and is less controlling. I don't recognize the second point: one of the pleasures of making pottery, for me and many others, is the lack of control over glazes and glaze application, the surprises that come out of the kiln. And potters talk and write rapturously about following where the clay leads our hands.

2. even worse, "the hobby creativity of the housewife". People having fun making pots, as well as serious artists devoting their lives to it. Among the people I know in the field, there is a range between these extremes. Do we want to demean the fun? Do Sunday painters make anyone less respectful of painting artists? Can't one develop into the other?

3. the low-tech materials and techniques used. The "idea of contemporaneity in sculpture...big and tough...no touch of quaintness...made by hired labor...the real artist just comes up with the concepts to be made by craftspeople." OK, conceptual art is a response to the industrial world and the images people find powerful now. And I recognize the separation of design and making as usual in architecture and interior design, as well as industrial design, all practical fields.  But, but, but. This can only work in some arts. No performer can produce concepts without skill, experience, doing it him/herself. Can you be a musician without playing or singing? Well, yes, composers, songwriters are musicians, even if they are known for their compositions, not their performance. That's the musical equivalent. But no denigration of the performers.

"Maybe this process-intensive investment associated with mastering ceramics is the reason that concept is sometimes secondary to form,"  I'll agree that concept is basic to art, imagining, expressiveness beyond the materials, at least usually.

When I first read this article, I saw it as snobbishness. Is it in a craft magazine so we will all react with outrage?

On some reflection, I recognize that art ceramics need concept more than functional ceramics. And that the concept may be a large part of the value of the pieces that are made. And that art made by people with skills the artist doesn't have (like architecture) belong to all the participants but mostly to the creator of the design, who is the artist. And even that I am a housewife with a hobby I am trying to develop into craft.

When I make pots focused on concept, I rarely find them as good or interesting as pots made for the form. For example, I've made a number of these goofy looking fish/containers. They are fun, silly, functional as soap dishes or bowls for a few small things, paperclips. I learned to make them in a recreational pottery class; thank you Reiko Campbell. I like them, my customers like them. But now I am done. 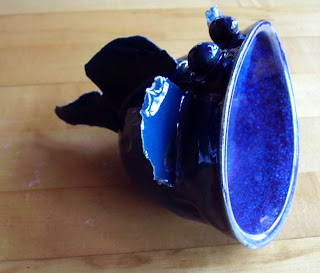 I do like this bowl whenever I use it. I made it to remember a trip in Arizona, canyon edges worn by seasonal water flow. 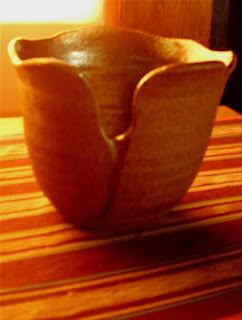 From the same teacher I learned to make calla lily decorated vases. I like them for the form of the flowers, not the concept. 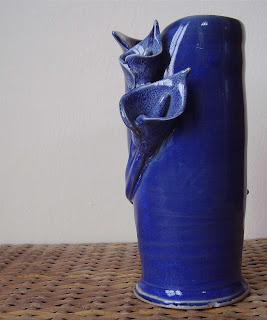 At one point I tried to color them somewhat more realistically. Definitely, no. 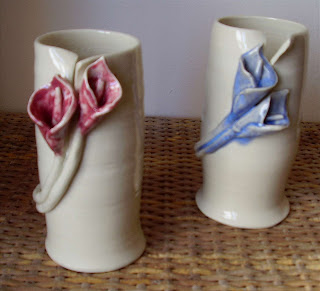 Perhaps the weakness is in the concepts I have. But what might be the best thing I have made is this wavy bowl, for the loose form and the visual texture in the glaze. 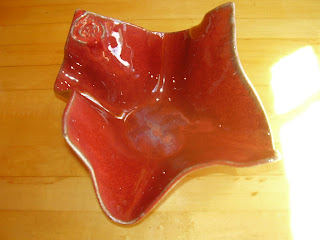 Posted by the village potter at 2:27 PM

the village potter
Hello. I am obsessed with pottery and loving it. Do you turn over the dishes in restaurants too? I am Anne, in San Diego. I've been making pottery for 14 years and some, mostly cone 6, that is, medium temperature firing. I make mostly functional pottery, dishes, to be plain about it. And they should look engaging and more personal than the usual commercial products. Contact me at thevillagepotter@gmail.com